Microwatt with Linux on OrangeCrab

Microwatt is an OpenPOWER CPU design to run on relatively small FPGAs. It can run ppc64le Linux. These instructions show how to get it going on an OrangeCrab FPGA dev board.

The OrangeCrab 85F board has a Lattice ECP5 chip with 85k LUTs, 256MB DDR3 RAM, 16MB SPI flash, and a SD card socket. That's plenty of resources to run Linux at 48MHz! Thanks to the efforts of the Yosys developers it is possible to build the whole FPGA bitstream using open source tools - an advantage compared to many other FPGA boards.

This guide is based on three components:

There are a few components involved in getting Microwatt running: the FPGA hardware, the Microwatt bitstream, and the kernel + rootfs boot payload. To build these components, we will also need a set of synthesis tools.

The steps below should cover a moderately straightforward case of booting Linux on a Microwatt CPU.

Firstly, we need to connect the OrangeCrab's JTAG pins to the FT232 JTAG interface. The connection is fairly simple - the header pins are the same order on each end, apart from TDI/TDO which cross over:

We also have connections for the TTL-serial interface to the OrangeCrab board. This provides a console for the Microwatt system:

The picture below shows these connections, with the OrangeCrab on the left, FT232 on the right: 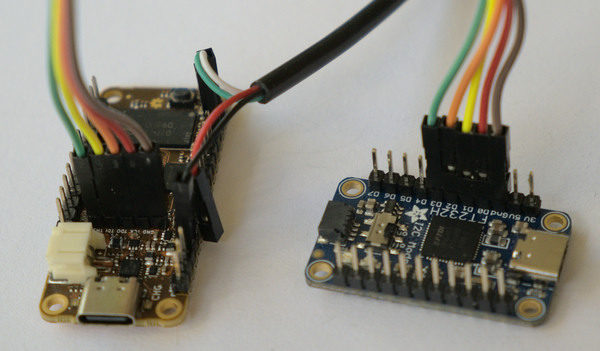 It is also possible to flash a FPGA bitstream with the OrangeCrab's USB DFU bootloader, which doesn't require a JTAG interface. However, the DFU interface cannot currently write a to other flash locations, which precludes writing a Linux image. Future developments on Microwatt may enable alternative ways to provide the OS & software components - for example, using the SD card. We will update this guide when those updates become available.

The Microwatt build process uses a set of digital logic design tools that are open source, but may not be packaged for your distribution. To make installation easy, the Yosys folks have assembled a suite of tools, called OSS Cad Suite. Download a recent release, and add the bin/ directory to your PATH.

Alternatively you can use tools from HDL Containers, or even build the tools from source. See Software Tools below for further details.

For the Linux kernel build, you'll need a cross-compiler for the 64-bit little-endian powerpc architecture. Most recent Linux distributions provide a suitable cross compiler - the package will likely be named gcc-powerpc64le-linux-gnu.

Microwatt for ECP5 targets is built with a Makefile. (Other targets like Xilinx use fusesoc but that doesn't support Yosys)

Yosys produces copious amounts of build logs - it's useful to redirect them to a file. For example:

Once the microwatt.bit file has been build, you can either temporarily load it to the OrangeCrab:

Alternatively, you can flash the image, which makes the bitstream persist across reboots of the FPGA:

After programming, and with the console UART connected, you should see the Microwatt banner appear:

However, since we haven't loaded a kernel yet, it will fail to read its boot payload from flash. You'll probably see something like:

- and no further output. In the next step, we will build and flash a suitable kernel to run.

Alternatively make microwatt.dfu will generate a .dfu file that can be programmed via OrangeCrab USB with dfu-util. This is a slightly different process, but may be handy if you're only programming the bitstream.

Microwatt runs mostly an upstream kernel but a few additions are yet to be submitted:

We have a branch containing these changes: matt/orangecrab, which is based on Joel Stanley's microwatt branch.

We'll be building this with an embedded initramfs filesystem, which provides a minimal userspace suitable for the Microwatt core: rootfs.cpio.zst. Details for building your own rootfs are included in the Custom buildroot rootfs section below.

To build and flash this kernel:

Reset the OrangeCrab and you should see Linux boot on the serial console, using the connection details as above.

In the console, you should see the usual Linux boot banner:

Log output will continue until the system starts userspace code, which will end up with a login prompt:

At this point, your new Microwatt system is ready to use! With this default rootfs image, you will be able to login as the root user, no password is required.

You may want to customise the embedded root filesystem used in the Microwatt kernel build. The pre-built rootfs image above was built using Joel's buildroot tree, which has some customisations for the Microwatt CPU implementation.

To download and build a new buildroot-based image, clone the tree and configure:

When configuring for Microwatt, the important options to set are:

This will download and build a suitable toolchain, the target packages, and build a compressed cpio image. This may take a while!

The resulting image will be generated in build/images/rootfs.cpio.zst - copy that to your kernel build directory as above, and rebuild.

If you'd like to replicate the build we have used for the above image:

The following sections contain some further details on the OrangeCrab port of Microwatt, which may be useful when developing or debugging.

The OrangeCrab has 16MB SPI flash.

The OrangeCrab board uses a Lattice ECP5 FPGA. One advantage of this part is that it can be targetted by entirely open source tools. It isn't necessary to understand what they're all doing, but the main tools involved are:

OSS Cad Suite is a tarball of prebuilt binaries for Yosys and various other tools. Grab the latest nightly build and put it in your PATH. Note that it includes its own lsusb which may be a surprise. Only x64 Linux builds have the necessary GHDL plugin.

Building Microwatt with make DOCKER=1 will use tools in Docker images from HDL Containers. Those tools are updated frequently.

The tools can be built from source. Summon-FPGA-Tools is one option.

Yosys and nextpnr print copious log information, most of it can be ignored unless investigating a problem. There are a few parts that are generally useful.

The most important figure is the final systemclk Max Frequency:

In this example the timing analysis indicates that the layout doesn't meet the desired 48MHz, though in practise a small difference will usually work fine. The Slack Histogram shows the distribution of timing slack - values are in nanoseconds, negative is failing.

It is possible to reduce the target frequency though below ~42MHz will prevent DRAM working - this may be board dependent. Note that valentyusb requires a fixed 48MHz if using the USB serial port.

There is a fair amount of random variation in output quality between different runs of yosys/nextpnr - the achieved MHz may vary between runs. Sometimes a small change to the design or parameters will randomly gain a few MHz. There is also a nextpnr-ecp5 -r option to randomise seed values.

Another parameter to look at is utilisation. The important cell types to look at are TRELLIS_SLICE which are LUTs (lookup up table logic) and flip-flops; and DP16KD which are block RAM.

Thanks to Joel for his instructions for Linux on Microwatt.